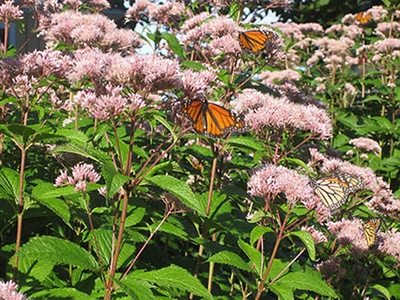 The monarch butterfly population in North America has plummeted by over 90% in just the last 20 years.  One of the biggest factors in monarch decline is the increasing scarcity of its only caterpillar host plant: milkweed. Without milkweed, monarchs can’t successfully reproduce and the species declines. By planting milkweed in your own garden and throughout your community, you can help reverse the fortune of these beautiful insects.

OCT wants people to understand what they can do to support monarchs and understand the role that land trusts play in providing habitats to support biodiversity – Monarchs included. 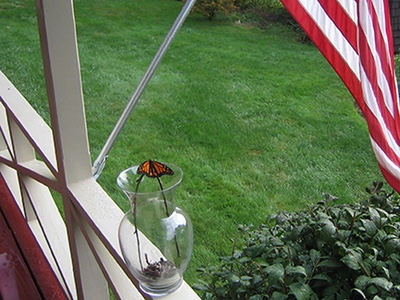 A coalition of land trusts and conservation organizations will be conducting workshops on the Casco Bay Islands during 2015 summer season. Oceanside Conservation Trust, Peaks Environmental Action Team, Southern Maine Conservation Collaborative, Chebeague and Cumberland Land Trust and others want to raise awareness of Monarchs and of ways to improve their numbers through direct local action in the Casco Bay area.

Late May: milkweed greens up.

End of August: milkweed dries up, the migration south begins.

September 11: the middle of migration.

Middle of October: becomes too cold for butterflies – below 50 deg F.

Some indicators of migration are the flowering of New England Aster, golden rods and Joe Pye weed all nectar sources.

Oceanside Conservation Trust of Casco Bay, an all volunteer non-profit land trust conserving land on the islands of western Casco Bay, received a grant from the Peaks Island Fund of the Maine Community Foundation, to help spread awareness regarding the threats associated with invasive plant species on Peaks Island. The Peaks Island Elementary School and the Peaks Island Academy, a private high school on the island, are working with Oceanside Conservation Trust (OCT) and the Island Institute’s Peaks Island Environmental Action Fellow, a program partially funded through AmeriCorps, to increase awareness of the problems associated with invasive species and the best methods for removing and controlling their distribution in the entire island community resulting in an overall healthier ecosystem.

“The Peaks Island Fund Advisors were very excited to consider and provide funding for such an innovative community effort. We are very hopeful to see a terrific collaboration formed between Oceanside and the students at the Peaks Island Schools, potentially creating both an extraordinary learning opportunity for the kids and establishing sustainable knowledge for the island about identification and management of invasive species” said Perry Sutherland the Peaks Island Fund chair.

This one year program will help to connect the students to a local, hands-on problem that will result in a better understanding of island ecology, plant identification, basic scientific methods, computer mapping skills and other important learning outcomes appropriate for their grade level.

“Additionally, we will work toward our ongoing global goal of having our students adopt an attitude of stewardship for their home place, Peaks Island,” explained Cindy Nilsen, principal at Peaks Island Elementary School.

“Island communities provide ideal locales for creating models for effective learning partnerships,” said Jessica Burton, Executive Director for the Southern Maine Conservation Collaborative. The Collaborative has been hired by OCT to coordinate this program with its intricate schedule and diverse partnership. As a service center for conservation organizations, the Collaborative provides staff support to otherwise all volunteer organizations such as OCT. “This project will have a lasting impact on the students and the natural environment of Peaks Island, while holding great potential for building similar projects in other communities in southern Maine. Sadly, invasive species management is a growing concern all over the region.”

To date, the students at the Peaks Island Elementary School have created a list of the “most wanted” invasive plants on Peaks Island while working with Bob Bittenbender, a board member of OCT and the Property Manager of Maine Audubon’s Gilsland Farm Property. Bittenbender visited the school for two days recently to help students develop an understanding of the damage these invasive plant species cause and the importance of having a plan to manage invasives.

“By getting people to know what plants are out there we can start working on control” said City Arborist Jeff Tarling. He also reminded the students that “when looking for invasive species, also look for natives.”

In the spring of 2013, using their knowledge of plant identification, the maps they have created, and the continued support of Jeff Tarling, the students will remove offensive plants from their playground and begin a replacement effort using native plant species. They will also work to inform their community about the importance of eradicating invasive plants from the island ecosystem. The Peaks Island Elementary School schoolyard will provide a model the rest of the island can follow.